How To Prevent and Clear Airlock in Pipes

With our busy lives, the last thing you want is to turn the taps on and no water runs out. Or it’s a frosty morning and it seems as if your radiators have totally given up and just run cold. If this has happened to you, then chances are you had an airlock in your central heating or hot water pipes.

The good news is that this could be a problem you can easily fix yourself, so before you call out a plumber, here’s what you can do to prevent and clear an airlock in pipes.

What is an Airlock?

For your central heating and hot water system to keep your radiators and hot taps working, it needs to push hot water from the boiler and around your home. But this flow can be blocked by air bubbles or water vapour that has built up in the water pipe or heating system – this is known as an airlock. If you have an airlock, it will stop the smooth flow of hot water to your radiators or hot water tap depending where the airlock forms. And this can lead to your radiators failing to heat up properly or prevent hot water coming out of your hot water taps.

What Causes Airlock in Water Pipes?

The main reason an airlock can form in your water pipe is trapped air in your hot water system or central heating. Air in your pipes have a tendency to rise, which causes air bubbles. If these bubbles get big enough or the space is small enough, in pipe bends, loops and curves, for example, then an airlock is created which will block the free flowing of the hot water. And this means your radiators and hot water taps can be cut off from their hot water supply.

How to Clear an Airlock From Hot Water Pipes

If you have an airlock in your hot water tap system and so have no hot water coming out of the taps, it is possible to clear it yourself, so you can restore the flow of water once more.  And there are two straightforward methods you can try, which could save you the time and expense of calling out a plumber. And all you need is some duct tape and a length of garden hose pipe.

The first method to try will involve attaching a hose pipe to both the hot and cold taps so that when turned on, cold water from the cold tap flows straight into the hot water tap, effectively pushing through and removing the blocked air.

Making sure your hot water is switched on, here’s what you need to do:

Should the hose pipe method of clearing trapped air in your hot water system doesn’t work, you can move on to method two, which should hopefully remove the airlock in pipes and get everything free flowing again.

This method requires you to drain the hot water system down, so you need to turn off your mains water supply by locating and turning off the stopcock.

Once you have turned off the mains water supply, you then need to:

If you follow steps one to five, the pressure of the water should force the trapped air out of your system, removing any airlocks and letting the hot water to freely flow out of all your hot taps.

However, if after following these two methods and your water is still not flowing, this indicates that the airlock is still in your system and it is time to call out a professional heating engineer.

How to Clear an Airlock From the Central Heating System

The clearest indicator that you have air trapped in your heating system and possible multiple airlocks is if one or more of your home’s radiators seem to be only heating up at the bottom, or worse still, failing to heat up at all. This lack of heat in your radiator/s is caused by an airlock causing a blockage and preventing hot water from circulating around your heating system as it should.

To try to release this trapped air in the water pipe and so allow the hot water to get to where it needs to go, you will need to bleed your radiators, which is a fairly simple process you should be able to do, without calling out an engineer. So, if you do suspect an airlock in your central heating system, bleeding the radiators is the first thing to try, before anything else.

Here’s how to effectively bleed your radiators and hopefully remove the stubborn airlock that is leaving your heating below par:

You will need to repeat the above steps with each of the radiators you have identified as not working properly and so having a potential airlock.

Once you have bled all the appropriate radiators, open back all the valves on each radiator so it is back to how it was, before the bleeding process. Now switch the central heating system back on and check the pressure of your boiler to ensure it is back in the normal range. You can now check all the radiators and you should find they are back to working properly again.

If this has not rectified the airlock issue in your central heating, you should call out a heating engineer so they can expertly explore the problem.

How to Prevent an Airlock in Your Pipes

Now your system has been cleared of trapped air, there are measures you can take to stop airlocks coming back. Preventing leaks is your priority and always ensure you have adequate seals in place. And, when draining or refilling a water system, take extreme care to prevent air getting in with the water pipe.

And if you are in any doubt, always call out a heating engineer, rather than attempting to fix an issue with your hot water system or central heating yourself. 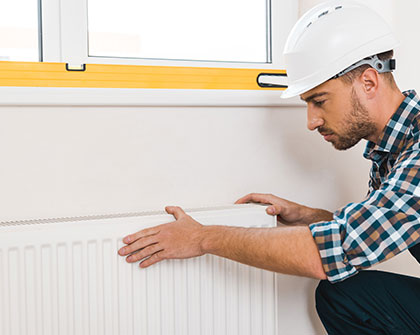 How to Remove a Radiator in a Few Easy Steps 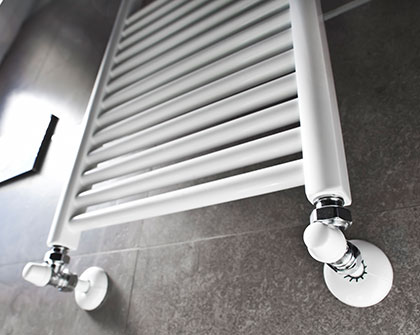 Radiator Cold At The Bottom? Here’s Why!

How to Balance Radiators: Step by Step